Netsounds Show off Their Latest Luggage……….

The whole of Netsounds Unsigned was in attendance tonight in Hootananny along with a bass playing Outsider, all of Bronto Skylift and a late entrance by Frank Finlayson in a plaster cast !!  Theres the great and the good of the Inverness/Scottish Pop Scene right there under one roof.  Scheduled for upstairs at Madhatters was of course the first Netsounds Unsigned Showcase of 2012 featuring Terraqoma, Dead Boy Robotics , Team Kapowski and Lady North hence both lynchpins of Netsounds being in attendance.  Jamie ‘The Voice and Body‘ Macdonald and Murray ‘The Brains and Violence‘ Cameron would be the final act to follow the 4 band onslaught.  2 Many DJs ?  Rumour has it thats two too many DJs.  Ok I’ve had my fun now so I’ll stop !!

A helluva line up in store for those who attended. Me ? I’m rubbish at attending and managed only the soundcheck for Dead Boy Robotics and Lady North.  The joys of shift work and fatherhood.  Gutted I missed Team Kapowski cos we like them a lot here at houdi towers. Terraqoma I shall research at some point soon !  So not a lot to say here really – here’s me blogging about something that’s still happening while watching a Beatles documentary on BBC4 as I drink cheap and nasty Aldi wine !!  Rock and flipping Roll ! Wish I had some manchega cheese and I could tapas the fuck out completely and listen to some Dead Boy Robotics online !

From what I heard at the soundchecks both DBR and LN were mesmerizing – tech meets drums meets stringed instrumenticationals !!  All my favourite stuff yet again !!  Someone even mentioned having a boner when DBR finished their soundcheck.   Go figure.  I’m not going to waffle about it – heres some photos and some links and sound files.  I’m basically practising my typing tonight 🙂 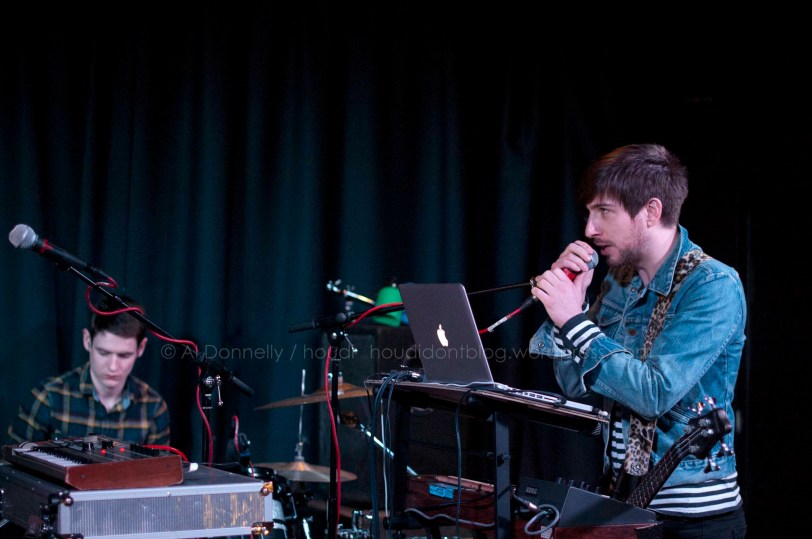 Nice one Netsounds for putting this line up together and well done Bulmers for making what I’m sure will be a very interesting DJ set later – cheers for letting me hang out again. Murrays always polite and Jamie got the beers in…………

The Art of Seduction – Team Kapowski

Its All About Gettin That Claude Monet – Lady North

2 thoughts on “Netsounds Show off Their Latest Luggage……….”